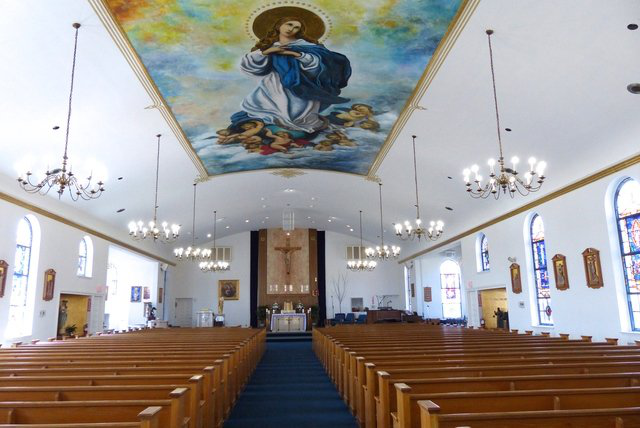 The Catholic Community of St. John Neumann, Sicklerville was begun in June 1972 as an extension of St. Mary’s Church to meet the needs of the growing Winslow population. Mass was celebrated in homes and then weekend Mass was celebrated in School #2 in Winslow Township. After St. John Neumann was canonized in June of 1977, the former community became a parish on June 19, 1977 and the Church was dedicated in September of 1978.

St. Mary’s began as a mission to St. Joseph, Hammonton in 1906. The first Mass was celebrated on Christmas Day in 1903 at the old Town Hall, Main and Hall Streets. St. Mary’s was erected as a parish in 1909. The first church was built in 1909 and a new church dedicated on Labor Day in 1925 at Main Street and Carroll Avenue.

In 1956 our existing church building was built to accommodate the growing needs of the parish. A new convent was built in 1970 on the same property as the old Convent. A new Rectory was built in 1972 on Carroll Avenue. The old rectory was torn down, and the old church building soon followed. The entire area became a huge parking lot. In 1976 a new school was constructed on Carroll Avenue adjacent to the rectory, and eight more classrooms were added in 1978.

A new Rectory was purchased and the old Rectory was turned into the Parish Center. Many shrine areas for prayer exist throughout the property and an Eucharistic Adoration Chapel was constructed in 2009. On August 9, 2009 the two communities of St. John Neumann and St. Mary’s merged and became Our Lady of Peace Parish.

Our Lady of Peace Parish

Our Lady of Peace Ministries